Apostrophes – They’re not for plurals! 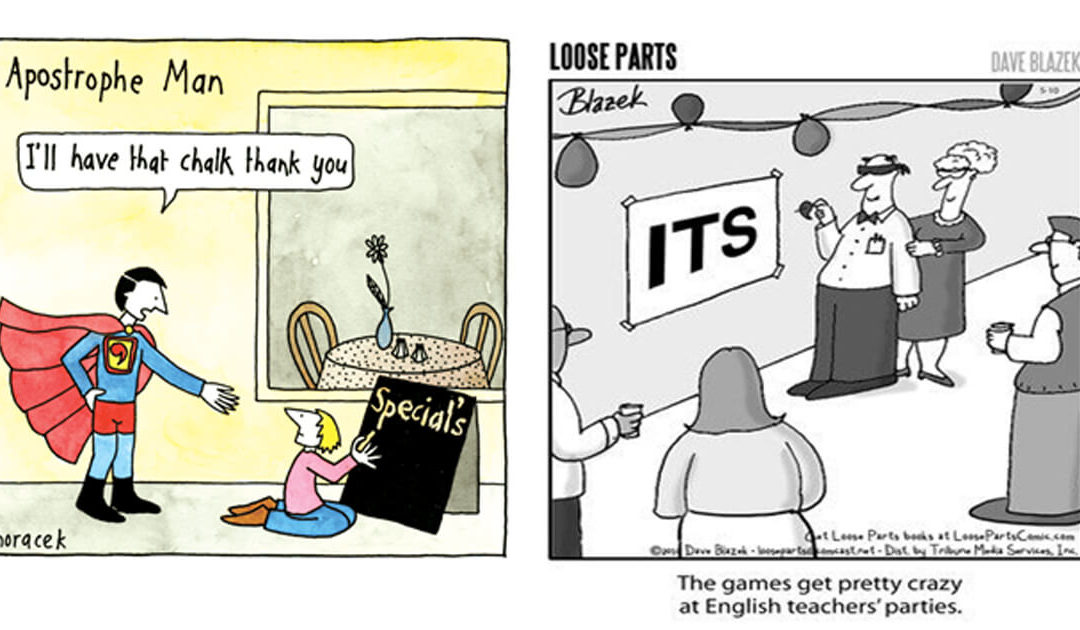 Welcome to the first Weekly Writing Tip. Today’s topic is my biggest pet peeve – the correct (and incorrect!) use of apostrophes. The poor apostrophe is probably the most misused punctuation mark in the English language.

Repeat after me: An apostrophe + “s” is NOT used to make a plural.

Apostrophes are used to: (1) show possession or ownership, and (2) to combine two words by leaving out a letter or letters, i.e., construct a contraction.

To indicate possession or ownership, add “ ’s ” to the end of the person’s name or the noun:

If the person’s name ends with an “s”, add both the apostrophe and “s”.

My boss’s job at the university was eliminated due to restructuring.
The class’s average grade was impressive.

The women’s degrees were in chemistry.
The children’s favourite game was Hide and Seek.

If the noun is plural and ends in “s”, then add only an apostrophe to indicate possession:

An apostrophe is also used in contractions, to indicate where a letter has been left out when two words are combined:

Contractions are typically limited to casual speech or writing and are not used in formal and professional writing, such as scientific and medical manuscripts.

Contractions versus Possessive Pronouns – it’s versus its

The single biggest confusion around apostrophe use is with the words “its” and “it’s”.

“Its” is a possessive pronoun and does not have an apostrophe:

The dog pulled on its leash.
The suspension separated into its components with centrifugation.

The same principles apply to “you’re” versus “your”, and “who’s” versus “whose”.

Finally, remember these important last words: An apostrophe + “s” is NOT used to make a plural. Of note, the one exception (there’s always an exception in the English language) is when referring to lowercase letters:

Thank you for indulging my pet peeve in this first Weekly Writing Tip. I welcome your comments and feedback, and I look forward to receiving topic suggestions for future tips.