WIIOKTUA? (When Is It OK To Use Acronyms?) 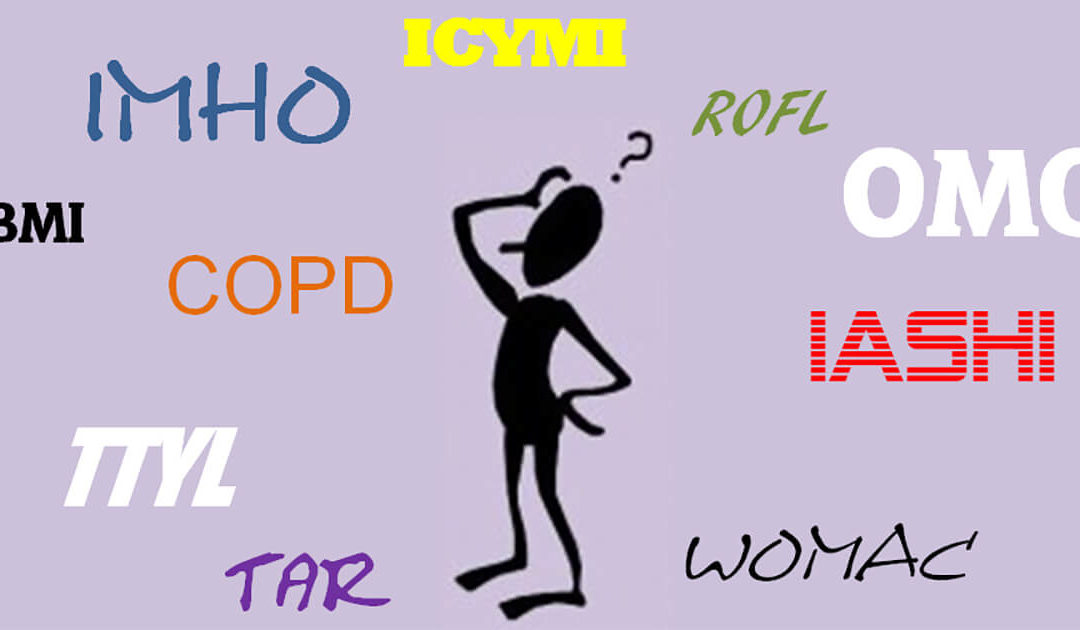 These common acronyms and many others are used abundantly in texts, tweets, instant and direct messages, and emails. Acronyms are generally used to save time when texting, and to save space and avoid repetition in papers.

In formal scientific and medical writing of manuscripts for peer-reviewed journals, when is it acceptable to use acronyms? And which acronyms are appropriate?

Let’s sidetrack for a moment and get technical about the terminology:

An abbreviation is a shortened form of a word or phrase with a period at the end and is used predominantly to represent the complete form. Examples include “Dr.” (for Doctor), “Prof.” (for Professor), “vs.” (for versus), and “est.” (for established).

An acronym is a pronounceable word formed mostly from the initial letters of a descriptive name or title. Examples include “radar” (for radio detecting and ranging), “laser” (for light amplification by stimulated emission of radiation), “NASA” (for National Aeronautics and Space Administration) and “AIDS” (for acquired immune deficiency syndrome).

If the string of initials cannot be pronounced as a word, but instead is spoken letter-by-letter, it is actually an initialism. Examples include “USA” (for United States of America), “COPD” (for chronic obstructive pulmonary disease), “BP” (for blood pressure), and “CDC” (for Centers for Disease Control and Prevention).

In scientific and medical journals, the term “acronym” encompasses both acronyms and initialisms. The first rule for writing medical manuscripts is to use acronyms sparingly. In practice, if a common, multi-word phrase appears abundantly throughout the manuscript (i.e., at least 7 times and preferably more than 10 times), an acronym will avoid repetition and reduce word length. However, the acronym should be well established and universally understood within the specialty. Examples of common acronyms in orthopaedic surgery include “WOMAC” (for the Western Ontario and McMaster Universities Osteoarthritis Index) and “BKA” (for a below-knee amputation). You know which acronyms are universally understood within your specialty and consistently used in the literature. Limit yourself to using those when writing a manuscript. Do not use rarely used or newly made up acronyms.

Intra-articular corticosteroid hip injection (IASHI) is advocated in hip osteoarthritis and is particularly useful for patients who require a delay in their total hip arthroplasty (THA).

The acronym should then be used consistently throughout the remainder of the manuscript. However, if the word or phrase begins a sentence, it must be written out in full; the acronym should not be used:

Few studies evaluated the safety of IASHI prior to THA, and methodological discrepancies made it difficult to make comparisons or draw conclusions. Total hip arthroplasty was performed by multiple surgeons with an unreported level of experience in most studies.

Also try to limit how many acronyms you use in the manuscript, generally not more than 5 or 6. Otherwise you run the risk of having a sentence composed largely of acronyms that will be difficult for the knowledgeable specialist and impossible for a reader outside the field to understand:

The use of IASHI is not advocated for OA patients with BMI>35 awaiting THA.

Finally, check the Author Instructions of the journal where you plan to submit the paper. Some journals require that all acronyms are listed and defined on the title page, in footnotes, or in a special section at the end of the manuscript, just before the References. Make sure to follow their instructions and provide the definitions accordingly.

I hope you’ve found these suggestions helpful. I look forward to receiving your feedback, and I welcome suggestions for future weekly writing tips.