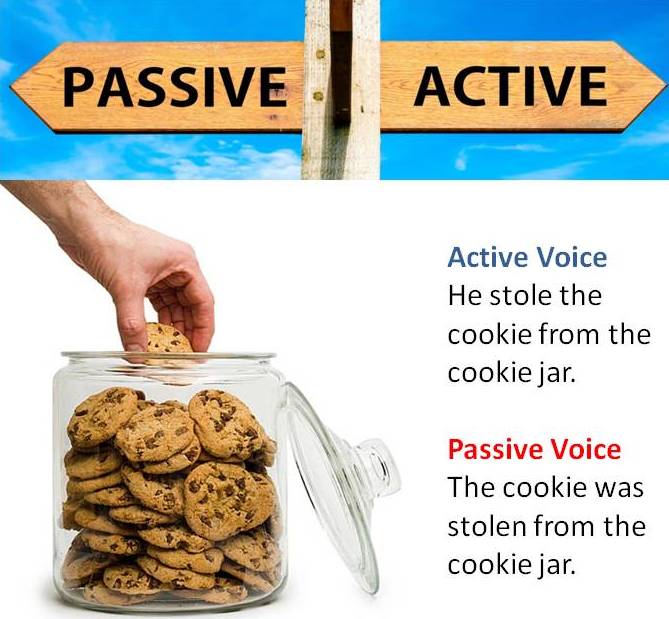 Active:  The student wrote the essay.

Passive: The essay was written by the student.

Active: We excluded 20 patients from the study.

Passive: Twenty patients were excluded from the study.

Today, we see active voice used more often in journal publications. For old-timers like me, the start of this trend struck me as poor writing by those who hadn’t been taught how to write science “properly”. But language – and writing styles – evolve. In recent years, as our understanding of bias has become more sophisticated, there has been a push to use active voice more frequently in science writing. Especially in qualitative research and in fields such as behavioural science and psychology. In fact, high school science students in the International Baccalaureate® program are encouraged to use active voice and first person in their science papers, especially in the Discussion section when sharing their interpretation of the data.

In a Twitter poll I recently conducted, 86% of respondents preferred to use active voice, while 14% were in favour of using passive voice.

That led me to do an informal review of recent issues of some major medical and scientific journals. Within a single issue of a given journal, the articles were a real mixture of writing styles, ranging from almost exclusively passive voice, to a balanced mix of passive and active voice, to some using active voice almost exclusively and with a great deal of first person language (I/we did this or that, we decided, we found that, etc.).

I’ve submitted manuscripts to a large number of journals, and I have not yet found any Author Instructions that actually specify whether one should use passive voice or active voice. If you ever run across guidelines that do so, please share in the Comments below, I’d love to know about them.

Yesterday, Twitter colleague Matthew Fox (@ProfMattFox) asked how we feel about using active voice in scientific publications, and the question generated an interesting discussion. It seems many people struggle with which voice to use and when.

I’m a fairly conservative writer, so I use passive voice as much as possible. It does somewhat remove the human element, to make the language and science sound more “impartial”. However, passive voice is weaker language when making a point. Active voice imparts more urgency and immediacy and makes a stronger statement. And active voice is usually more concise.

My own preference is to use a mix of active and passive voice in the Introduction and Discussion, depending on whether you’re commenting on the results of your study, or citing the literature.

The Methods should be written predominantly in passive voice. In this section, one is explaining how subjects were recruited; how samples were obtained; the surgical techniques; the cellular and molecular experiments that were conducted; and how results were visualised, measured, and analysed. The important take-away points are HOW things were done and WHAT was done, not WHO did it, to allow others to replicate the process. However, if it’s vital to specify who performed a task (surgeon, physiotherapist, radiologist), then active voice is best.

The Results will also be a mix of active and passive voice, composed of simple sentences reporting outcomes. Use active voice as much as possible:

Operating times were significantly shorter for the arthroscopic surgery cohort.

The median scores for both measures were nearly identical across grades.

I like a concept raised by Bill Miller (@BillMiller_Epi) in yesterday’s Twitter discussion: Use active voice unless the sentence happens to be about the object that is being acted upon.

Passive: Pollen is dispersed by bees.

Is passive voice passé? I think not. As the language of science evolves, there is room for more active voice, but passive voice will always have a place in scientific writing.

Did you find this article helpful? Are there other topics you’d like to read about? I welcome comments and suggestions.