Another Peeve – Should of or Should Have? 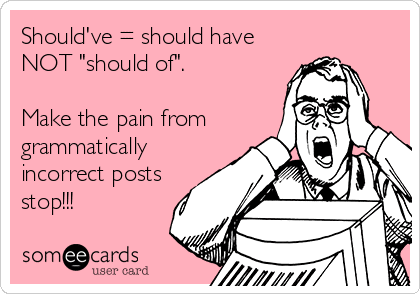 The correct versions of these phrases are “should have”, “could have”, “would have”, and “must have”. When we shorten these to a contraction, they are properly written as “should’ve”, “could’ve”, “would’ve”, or “must’ve.” But that looks odd, doesn’t it? I don’t think I’ve ever seen them written that way, except perhaps in a novel, when writing out someone’s conversation.

It’s surprising how many people write or spell these phrases incorrectly. Especially in their social media posts. I think the confusion arises from how they are spoken. In speech, we largely resort to using contractions – unless you are Lieutenant Commander Data. Contractions make language flow smoother and shorten what we need to say. When pronouncing “should’ve”, it is indistinguishable from “should of” to the ear. Therein lies the problem. If one hears “should of” often enough, one will be tempted to write it that way.

Moving forward, I hope everyone takes note of the correct writing of these phrases. I’d be happily relieved if this was one less thing for me to correct when editing a paper. I’d especially enjoy having one less thing to cringe over when reading social media posts.

Was this writing tip helpful? Would you like to be notified when future writing tips are posted, so you don’t miss any? Then just check the box under the Stay Up To Date heading at the top right of this page and provide your email address. I promise it won’t be used for any other purpose.

If you have a topic you’d like to see covered in a future Weekly Writing Tip, submit a comment below, and I’ll do my best to address it soon. 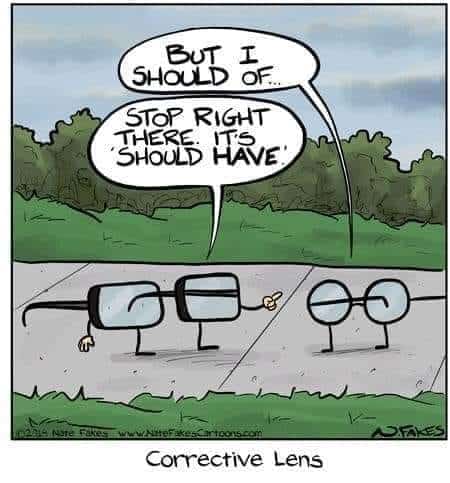